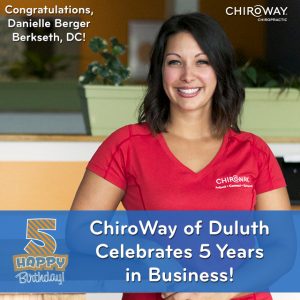 This week marks 5 years since Danielle Berger Berkseth, D.C opened ChiroWay of Duluth, a milestone breached in what seems like a blink of time..

With not only surviving, but thriving in business-we went ahead and asked Danielle Berger Berkseth, DC owner and Chiropractor of ChiroWay Duluth a couple questions looking back on her past five years in business and practice.

Before attaining her Doctorate of Chiropractic from Northwestern Health Sciences University, Danielle Berger Berkseth grew up in Foxboro, where she was first introduced to her love of chiropractic. Berger nannied for the family of a local chiropractor where she witnessed, and personally experienced the life changing impact of spinal adjustments.

Regarding her decision to collaborate with ChiroWay, Danielle stated “I started ChiroWay of Duluth because I wanted to own my own practice, but I also didn’t want to go into practice all on my own, I wanted some guidance. Owning a franchise location has meant I’ve been able to make my practice my own all while having a team of chiropractors to work with and give direction as I needed it.”

Danielle, cites her biggest professional accomplishment in this half decade as having continued her education with the International Chiropractic Pediatric Association, “ICPA” and “expanding the practice member base that I have, and using the interactions I’ve been through with clients to better serve individuals coming in seeking care.”

The ICPA’s mission is to establish and advance the chiropractic family lifestyle.  The mission at ICPA and ChiroWay are shared with similar values that promote regular chiropractic for infants, children and adults to express a higher quality of life.

Danielle, who proudly became a new mother this last December, states her high point in personal achievements since opening her practice  include the birth of her daughter, which comes with her capacity and freedom to spend several weeks with her new family of three.

When asked what comes to mind about this achievement of time, Danielle responded “ I think about all of the people I’ve met and cared for over the last five years and it makes me so happy to know I’ve helped the amount of people that I have. Many of them have become friends and feel like family to me.”

Trent Scheidecker, DC | ChiroWay of Woodbury | Owner & Chiropractor
Trent Scheidecker, DC frequently visited his chiropractor when he was in high school and knew the benefits he experienced were worth the time and investment to become a chiropractor. He wanted to help his community experience a higher quality of life through regular chiropractic care. In 2010 Trent founded ChiroWay in Woodbury and since that time has served over 3,000 clients. He has been named “Best of Woodbury” in Woodbury Magazine seven times. Trent has also mentored colleagues in practice and franchised ChiroWay in 2012. Today, there are 8 ChiroWay locations throughout Minnesota.

The information in our articles are not intended to diagnose, mitigate or prescribe the use of any technique as a form of treatment for any physical conditions, symptoms or diseases. Directly consult with a qualified health care professional for any chiropractic or medical advice. In addition to the benefits of chiropractic care, one should also be aware of the existence of some risks. Risks associated with some chiropractic care may include soreness, musculoskeletal sprain/strain, and fracture. In addition, there have been reported cases of stroke associated with chiropractic care. Research and scientific evidence does not establish a cause and effect relationship between chiropractic care and the occurrence of stroke; rather studies indicate that people may be consulting chiropractors when they are in the early states of a stroke. In essence, there is a stroke already in process. However, you are being informed of this reported risk.
ChiroWay Team2021-06-22T11:50:45-05:00